Nikolay Khozyainov (Николай Юрьевич Хозяинов) is a Russian classical pianist who is viewed as a great representative of the Russian piano school, and is noted for his poetic piano sound and brilliant virtuosity. He started his career, like Mozart, at 5 years old. When he was 6 y.o. he shocked the audience performing with an orchestra at The Big Hall of the Moscow Conservatory. Now Nikolay Khozyainov is 27 years old and he is a prizewinner of many prestigious piano competitions, like Chopin contest in Warsaw, Dublin international contest and so on this young artist already has four albums in his discography. Nikolay speaks 8 languages, studies music history and arts. All that helps him to create a special atmosphere during the concerts. Khozyainov has been thrilling audiences around the world, including the Emperor of Japan, and his recital and concerto engagements have included sold out appearances at Carnegie Hall, Wigmore Hall, Lincoln Center, the Kennedy Center, Moscow’s Tchaikovsky Hall, Suntory Hall, as well as Salle Gaveau. His performances have been garnering glowing reviews wherever he has performed. At the 2012 Dublin International Piano Competition, distinguished pianist and teacher John O’ Conor said of Khozyainov, that in spite of his very young age, he “played like a young God of the piano.” 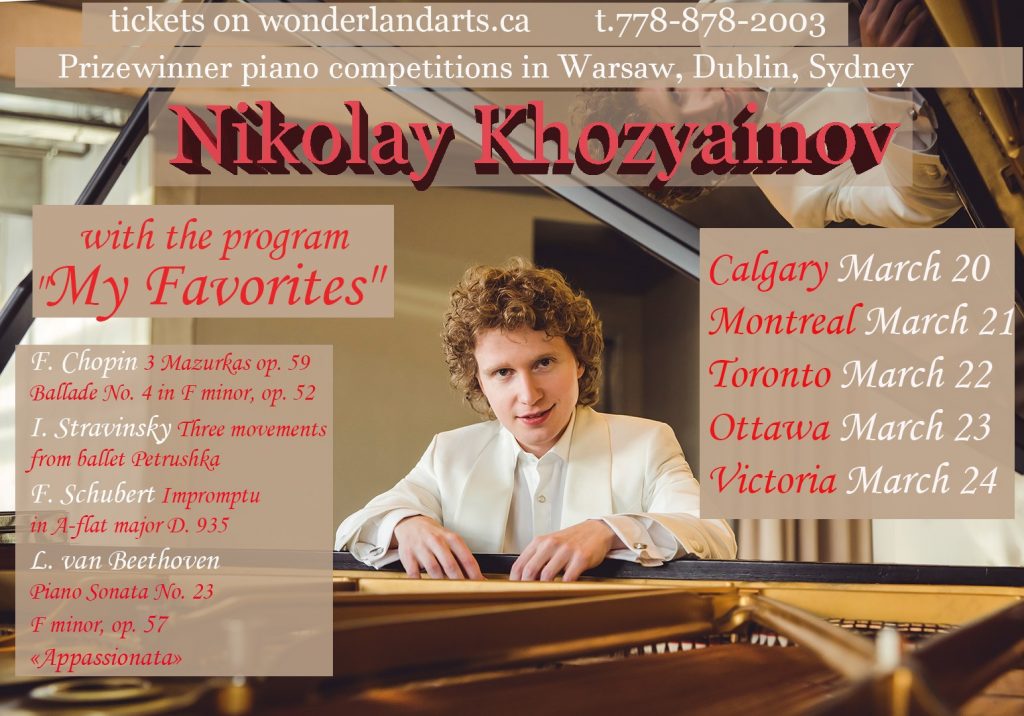 Mission Statement «Art for the sake of truth, art for the sake of the good and the beautiful, that is the faith I am searching for.» ― George Sand.
Wonderland arts society is an organization of people who are trying to find truth in arts, based on the traditions and fantasy and can be named classical art for nowadays. The society aims to promote classical arts among the people of Canada, who come from a rich variety of ethnic backgrounds, and to emphasize the importance of classical traditions in arts’ education. We have chosen to name our Society after the famous story “Alice in Wonderland” because of the universal appeal of this story, based on classical traditions and fantasy. We are trying to promote classical artists, who managed to find new ways of arts. We are also support classical arts students showing them how important are their willing to art, how they can archive their goals through masterclasses, concerts, establishing connections and exchanging of the life experience of the best artists of the world. Together we can create new arts, that can be named classical in a while, find new paths of expressing yourself and add beauty to the world Structure The Vancouver Chopin Society is a registered as nonprofit. All donations will be acknowledged in VCS concert programs and supporting gifted students. Our activities are presented mainly through the assistance of volunteers. If you are interested in helping us as a volunteer,
please call 778-878-2003